Huthwaite Councillors already had an aptly titled Health and Hospital Committee. Their actions were influenced by authoritative advice from an officially appointed Medical Doctor of Health. Whilst severest illness and industrial injuries were still referred to the one county hospital called Nottingham General, the local council could also be charged if sending patients similar distance to Derby or Chesterfield. And then came national realisation of inherent risks when they dealt with quite common infectious diseases.

The Huthwaite Medical Officer invited referral to a Local Government Act 1929 after reporting February 1932 on two cases of infectious disease. First case sent to the specialised Sheffield Corporation Isolation Hospital became a matter requiring committee attention. Their Clerk is then delegated task of costing up a potential Huthwaite facility. No action is taken pending development of a County Council scheme. A September request for elected delegates to attend the Notts. County Council conference appointed that post to the Chairman of both the Council and Health Committee, Councillor Goodall assisted by the Clerk.

An example of treatment costs is found following month, when committee considered quote of £70 10s. for treating two district cases at Worksop Urban and Rural Isolation Hospital. Huthwaite councillors voiced an appeal for lower pricing along with larger attendance at a Worksop conference. Approving Decembers lowered weekly charges to £4 4s. per patient, must have come shortly before decision they should erect their own Huthwaite facility.

This extremely rare sight of Woodland Hospital has only been discovered by zooming in on yet another very rare view of a Huthwaite railway station ticket office kindly shared from A Knighton's collection.

Looking south slightly east over Chesterfield Road bridge, a Railway Inn served on left. Up top horizon is that isolation ward above Strawberry Bank area. Clean air was one major prerequisite treating any improvement in health, so there would have been plenty of that spare when this location could have recognised Nottinghamshire's very highest situated medical facility.

The unused hospital stood empty around a year. Its planned purpose was commended by the Duchess of Portland on one of her surprise visits March 1934, and Her Grace eagerly proposed putting it to good use as a social centre for Huthwaite Unemployed Workers. But councillors had already decided back in January to dismantle and re-erect a Welfare Park storage room to enable more housing. Taking Woodland area name with it, that still stands after being adopted by a Huthwaite Amateur Boxing Club. 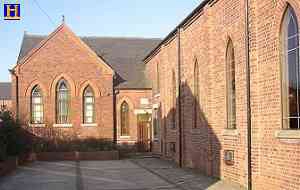 Most families realised the benefits to come being given this care, so door to door collections were generously forthcoming. New Hucknall Colliery Company is just one major regular corporate contributor. Despite hard times, reported 1930s figures show its those miners who chiefly raise funds, sharing payouts between other good causes through a New Hucknall Workmens Hospital Fund.

Under later authority of an enlarged Sutton Council, 1935 consideration was given to reorganising district maternity, child welfare and antenatal services. New Medical Officer of Health asserted all existing localised premises would suffice for at least another three months, and he'd place orders for necessary equipment. Nurse Dickens retained her Huthwaite position, and there was no reason for changing existing schemes dispensing free milk, or for free dental surgery offered to both expectant mothers and children to age five. 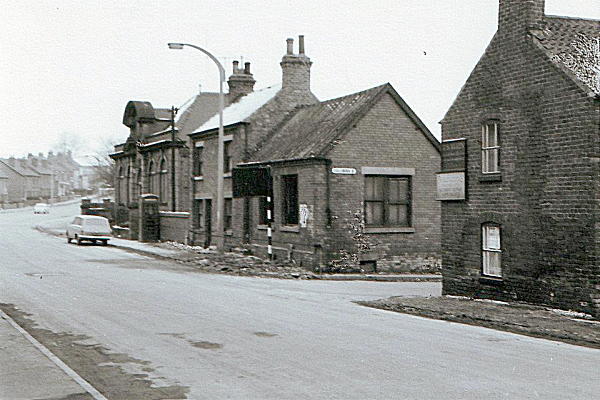 Among a variety of public uses, its quite probable the Lecture Hall beneath Huthwaite library went on hosting local nursing association meetings, if not later serving time as a medical dispensing clinic.

The Welfare of Huthwaite children was clearly demanding a purpose built medical facility. That looks to be primary reason behind opening a New Street clinic. Vaccination jabs gave reason for my earliest memory of being dragged into this building.

Greeted by an overpowering smell of disinfectant, the echoing shrill cries coming from other children behind closed doors could have been a lot more unnerving without some kindly faced nurses.

Sender suggests year 1948 when this Whit parade passes a newly built New Street Health Clinic. No coincidence at all if dating from around time Britain introduced the present National Health Service.

Inset image shows Wood's dairy farm, which had firstly stood on the site before recognising bottom end New Street. Clearing that plot between New Hucknall Colliery Institute and below a long row of early 20th century housing, provided a suitable area for building a centralised medical clinic. Initially fronted by a wall, windows and roofline can indicate original size, compared with 2006 photo of a long familiar fully extended Health Centre.

Two storey far end section is understood having been built as a replacement home for an Institute secretary. Dating when it was incorporated into an extended clinic is all loosely suggested through the 1950's to add extra rooms creating a single NHS Huthwaite Health Centre that replaced all previous use of individual doctor surgeries.

Dr Donald Clitheroe extended his service here, alongside a Dr Hyde initially being the two most respected names when Huthwaite Secondary Modern School presented this Health Centre with an expensive electrocardiograph machine.

Among a representative few chosen for this school photo, plus hopes of BBC TV news coverage, our efforts were nationally broadcast featuring just a two second video clip.

Dr Hyde afterwards gratefully collected this equipment, as personally recalled from his demonstrated use attaching electrodes to display how my healthy heart was functioning. Headmaster Mr J Potter had bestowed pride in morning assembly, acknowledging the longest distance swum.

This New Street Health Centre actually catered for a broader area a little beyond Huthwaite. Accommodating all later registered General Practitioners eventually required a few cabins joined on at rear. Under Dr Ewbank's long years service and leadership, the sign aside newer automated door entrance listed up to six regular doctors. Clinic nurses and trainee doctors added numbers, while partitioning off the reception desk behind safety glass raised one controversial issue. Staff changes apparently sought protection fearing potentially violent patients. Whilst never witnessing or even hearing of any such incidents, staff rudeness certainly shared mention throughout latter years service. Loudly voicing a superiority and or disdain having to deal with vulnerable public was not just disgustingly well recognised, but could well have been real reason to provoke any angered response from humiliated visitors.

A significant amount of residential expansion from around year 2000 suggests one good reason why the Health Centre claimed to be increasingly busy. Despite best efforts to thwart folk making a doctors appointment, via telephone only then after rigorous questioning regarding absolute necessity, the issue of street parking must have worsened by relocating Huthwaite Pharmacy into an adjacent New Street building, after attendance greatly relied on cars.

Community frustration wasn't helped after sighting 2004 sold sign of a large still unused corner plot blocking off any public use. Eventually and by some means unknown, that former Colliery Institute parking area was claimed and opened up to alleviate street congestion through several final years. 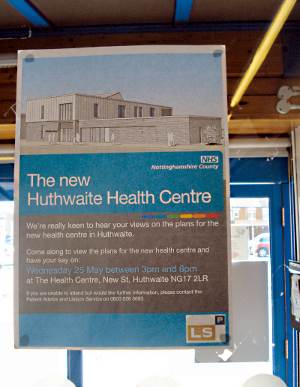 May 2011 found this poster upon entrance door, bringing end to decades of speculative rumours about plans siting a future Huthwaite Health Centre. From 1992 demolition of a cornering Miners Institute that questioned if Dr Smith may have personally sought to profit by presenting a larger neighbouring plot, public intrigue was never fully aware of a legacy bequeathed by the aforementioned Dr D Clitheroe.

Dr Don had earlier shared his father-in-laws public Sutton Road Huthwaite surgery before claiming one of the first consultation rooms inside the newly built New Street clinic. His own family residence claiming private grounds opposite side that road, then mysteriously stood vacated since retiring elsewhere, until ultimately and very generously affording a vastly superior modern complex that materialised in 2013.

Maybe Donald had been aware of past difficulties acquiring a more suitable plot for the first NHS clinic. Urgent necessity managed to squeeze into its central back street location. Soon after demanding more room, there was some good fortune allowing extended layout to struggle on serving about 65 years.